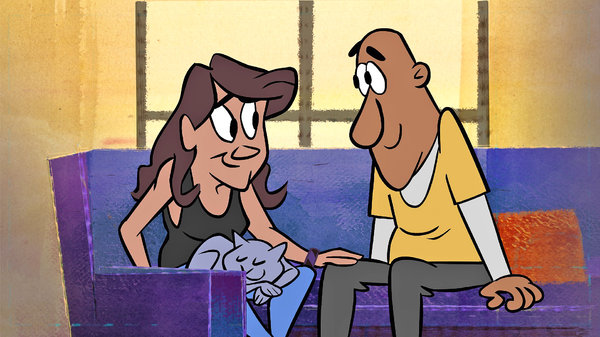 Still from a StoryCorps animated video

Two New York Times stories from this month point to how storytelling may help people develop greater empathy for others. And that has relevance for the issues discussed in the Working Narratives publication, “Storytelling and Social Change: A Strategy Guide for Grantmakers.”

The first story reports on a study that shows how reading literary fiction can enhance readers’ ability to sense other people’s emotions. In the study, some participants were asked to read a short passage from literary fiction; others read a short passage from popular fiction; and still others read from serious nonfiction that was not character-driven. Afterwards, each participant was asked to look at a series of photos of people’s eyes, and take a multiple choice test about what emotion the eyes of people in the photos were expressing. People who had just read the short passage from literary fiction scored highest.  Granted, there are limits to the study, but it seems to back up an intuitive conclusion, which is that good, character-driven stories help us get inside the experience of other people. I’d argue that the same is true for well-told nonfiction stories, which is why, for example, the in-depth stories in the Voice of Witness book series help readers understand the humanity of people whose human rights are being violated — thus making way for change. But fiction has its value, too, of course, and the New York Times story says that researchers believe that the sensitizing effect of literary fiction is due to how “literary fiction often leaves more to the imagination, encouraging readers to make inferences about characters and be sensitive to emotional nuance and complexity.”

Another story reports on the tenth anniversary of StoryCorps, which describes itself as “an independent nonprofit whose mission is to provide people of all backgrounds and beliefs with the opportunity to record, share, and preserve the stories of our lives.” In the New York Times story, president Dave Isay says his organizations is “more about listening than it is about storytelling,” and that the act of listening “reminds people that they matter.” Isay says he long ago decided to dedicate his life to building the organization which he hopes “moves the needle on getting people to listen to one another.” Getting people to listen is indeed a challenge not just for, well, just about any individual at some point in their personal lives, but also for activist groups that use stories to mobilize people around their issue — how to get people to listen in an environment where we’re bombarded by stories and images all the time. That’s another question discussed in Working Narratives’ story guide.